A Mission Beyond Her Making

What happens when this captive mind and body, touched by death, follows her rebel heart and runs away with a free spirit to live and dream on the integrative frontiers of art, science, and tech for twenty plus years?

My “curious affair” ultimately produced a 76-minute film, evolved from the ideas, the music, the choreography, and the cinematography of past projects. I have enjoyed characterizing Grace Fury: A Voice with Legs in different ways…as “the brainchild of my fire & grace”…as both a fight song and a love song in one lyrical journey through the elements of my renegade experience.

She is a passionate and pensive story of sorts, through movement of body, thought, and feeling. You get the picture through light and dark and colors between, without the straightforward delivery and detailed facts that might flow from a more traditional narrative, biography, or documentary.

Perhaps she comes closer to a “dance-u-mentary”, but a short fictional tale also unfolds, central to her being.

She’s both fiction and non-fiction – films within a film.

Also like a multi-faceted dance, she’s defined by her connectivity and her transitions from one element to another. Her parts and play – her ideas, images, music, and moves – work together, with some discord and disruption to make and reinforce the point.

After all, she found credible success, internationally and coast to coast, along the film festival spectrum, enjoying recognition across multiple categories and genres.

To the hearts and minds of skilled and reputable critics, writers, radio hosts, and filmmakers, the quiet, impressionistic film also spoke loud and clear.

I am still supremely grateful for each and every one of those affirmative moments. Not all resulted in awards or A-ratings, but all brought great peace and nourishment – a deep breath. To be seen – to make meaningful contact with receptive, empathetic beings, their astute perceptions, their accuracy, and their attention to both detail and big picture is a lasting gift and a vital resource for battle. Unfortunately, that, too, rages on.

Already in defiance of a mostly top-down-power-controlled, consumer culture,
Grace Fury gives honest voice and rebellious form to a period of independent adventure,
full of problems and progress that provide and authenticate her substance.

She also amusingly warns “we have no ending”. Indeed.
Just from the film’s first presentation to her final cut and release, I’ve spiraled on. In a way, this subsequent journey inspires the film’s sequel, her life through festival searches, distribution considerations, and PR campaigns, all but a breeze and happily ever after. Those collisions between doubt and determination that still dare me to keep going and expose me to more challenges, also make the film’s first insights, ever more credible and worthy of expansion.

Fortunately, the film sets the stage for just that.

In final communion with the cosmos, Grace Fury finds her star power and reminds you of yours. Then and there, her mission extends beyond her own making.


She is ongoing, a work in progress, “greater than the sum of her parts”…so long as we are the universe talking to self, still engaged and grounded in discovery and reflection. — “So be it.”

This new online adventure, A Voice With Legs,
hopes to bring that fighting and free spirit of the film, Grace Fury, into routine.

Let’s work together to keep the artistic frontier expansive and truly inclusive, welcoming of all experience and the ability, not just to reveal, but to challenge ourselves and each other in the process.

Let’s help the creative realm become a place of integrity, a community of support for those who not only script and portray the human event…who not only speak truth to power, but who also aim to live it. 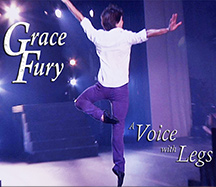 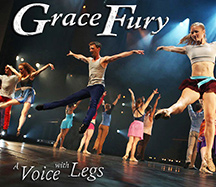 Grace Fury “had me swaying…” 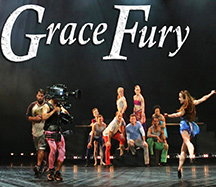 Grace Fury is “refreshing and inspiring” 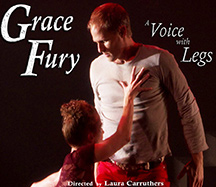